How to build a xylem filter in order to purify drinking water!

I cut the bottom off an old water bottle for the dirty water reservoir, and then hung it on a nail to slowly do its thing when I got tired of holding it. The rubber tubing is pushed through a hole in the water bottles lid. I had thought the thick rubber tubing membrane would fill any gap in the hole I cut in the lid. But I ended up having to use a little silicone calking I had lying around to properly seal it. That fixed the leak and kept the water going through the stick; which I freshly cut right before the experiment. 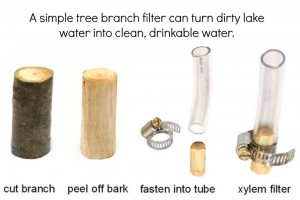 Apparently this is the next great revolution in water filtration for third world countries. What the website didn’t tell me is that you have to hold it for 30 minutes before it gets saturated enough for a slow steady drip. Once it saturates through your pretty good. Here are some quotes taken straight from technologyreview.com because they know the technicalities and terminologies that I don’t. The complete link is on the bottom as well as a YouTube video for further reading and watching.

in hind site i should have used a wider stick, like recommended below, and one trimmed a little shorter. it is a reliable, though extremely slow process. hang the guy up and go do something else while you water slowly filters.

“Xylem is the porous tissue that conducts fluid in plants. In woody plants, it is called sapwood. Surrounded by bark, it often surrounds older, inactive heartwood itself. In conifers, it is formed from dead cells called tracheids, which are essentially hollow tubes with diameters of up to 80 µm and lengths of up to 10 mm.

These cells grow in parallel and have closed ends. The water passes from one conduit to another through holes known as pits, which are covered in a membrane with nanoscale pores that act like a kind of sieve. Anything bigger than these pores cannot get through.

So in theory, the plant xylem from conifer trees should be an effective filter.

To find out, Karnik and co cut 1 inch-long sections of branch of the white pine tree pinus strobus. They peeled off the bark and stuffed the remaining sapwood into a tube, sealing any gaps with epoxy resin.

They then filled the tube with 5 millilitres of deionised water under 5 pounds per square inch of pressure, equivalent to a gravitational pressure head of about 2 m or so, and waited to see what happened.

Sure enough, the water filtered through at the rate of 0.05 millilitres per second. That flow rate is equivalent to more than 4 litres per day, enough to keep one person in drinking water. That’s from a filter with an area of about 1 cm².

Next, they studied the material’s filtering properties. They added a red pigment to the water and measured the distribution of particle size within it. This ranged from about 70 nanometres to 500 nanometres in size.

The filtered water was clear, however. And the particle size distribution in the filtrate peaked at about 80 nanometres. Clearly, the xylem filters out particles larger than this. In a separate experiment, they added 20 nanometre fluorescent nanoparticles made of polystyrene and found that the xylem could not filter these out.

The conclusion is clear. “We find that the xylem filter exhibits excellent rejection for particles with diameters exceeding 100 nanometres,“ they say.

To test the material’s ability to filter bacteria, they mixed inactivated Escherichia coli bacteria to water and passed it through the system. E coli are cylindrical in shape with a diameter of about 1 micrometre.

To find out exactly how the xylem works, they cut open the filters and studied the internal structure of the wood. They found that most of the filtering occurs in the first two or 3 millimetres of the filter. That turns out to be more or less exactly the length of the tracheid cells and suggests that the wood filters can be cut even shorter and still function effectively.

They also took electron microscope images of the cell pits, which showed that the bacteria collected near these pits, suggesting that this is indeed the mechanism of filtration.

There are some limitations to this kind of filtration. First, the 100 nanometre limit is too big to filter viruses. Karnik and co say it may be possible to find other plants with smaller pits that could do the job.

Second, the wood must be freshly cut to work as an effective filter. The team say that the conduits in wood that has dried become blocked and so don’t work as filters. That’s a potentially serious problem should these filters need to be supplied on a large scale–distributing them around the world while keeping them fresh will be hard. However, it may be possible to develop drying techniques that maintain the structural integrity of the filters. Clearly, more work is needed here.

Nevertheless, this is impressive work that has the potential to make a big impact in many parts of the world. According to the World Health Organisation, some 1.6 million people die every year from diseases attributed to the lack of safe drinking water and basic sanitation. What’s more, 90% of these are children under the age of five, mostly in developing countries.

Xylem filtration won’t fix this by itself, not least because it can’t presently filter waterborne viruses such as hepatitis, rotavirus adenoviruses and so on. But it could have a big impact by removing bacterial and protozoan pathogens such as E coli, salmonella typhi, vibrio cholera and giardia.”