Point of Aim vs Point of Impact 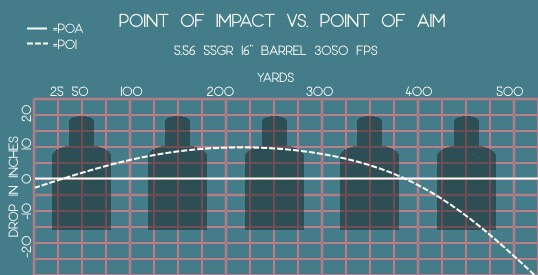 This is the point at which the line of sight through the aiming device intersects the target. It is important to note that this plane and that of the bore itself are not on the same axis. The bore will almost always have an upward angle in relation to the optical plane.

The point at which the round strikes the target. Many factors can make this diverge from the point of aim; the greatest force working on the point of impact on a vertical axis is gravity. A bullet is fired on an upward trajectory and begins falling as soon as it leaves the muzzle, making range one of the greatest considerations. On a horizontal axis, conditions such as wind and the speed of target movement must be considered.