“There’s no such thing as white nationalism. That’s the irony, what is white nationalism? White’s a race…How could you be a white nationalist when there’s no white nation?..So this notion, ‘oh if the president of the United States mentions something about nationalism it’s something about white supremacy,’ that’s absurd. The whole point of American nationalism is that it contains people of every race. Nationalism ends race. It doesn’t celebrate race. It celebrates nation, and it’s a beautiful thing to have a national identity…People of every different race and every different religion united in one nation, what could be more beautiful?” - Verified “Conservative” Commentator Dennis “Jews are not only a religion. They are also a people or a nation” Prager (DennisPrager)

“The day America abandons Israel will be the beginning and the end of America as we know it.” Dang, that kind of sounds like a threat 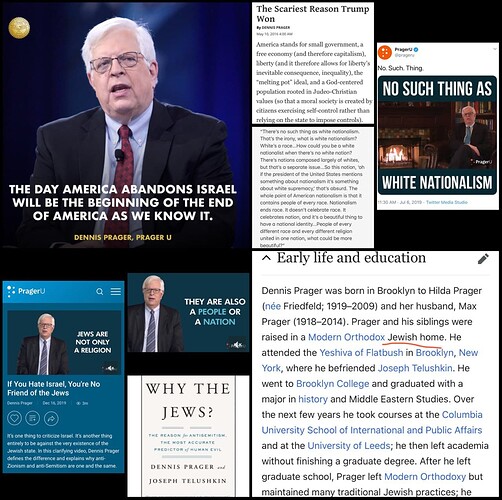