Weimar Inflation, the Great Depression, and How Adolf Hitler Ascended:

After the First World War, Germany was subject to a great economic distress that had affected the very way of life of the German people. The country was barely able to support itself let alone pay its reparations from the Treaty of Versailles, amounting to an official demand of 132 billion gold marks, which was designed to cripple the Germans [1]. Yet when it actually came to how much the Weimar Republic paid back into this, the total amount was 20 billion, of which 12.5 billion had come from New York banking loans [2]. To the National Socialists, this treaty was not a treaty of peace, rather one of exploitation and humiliation that had lowered Germany into a mutilated power. The fact that the German people had to pay such a demand in the sight of stricken poverty created national resentment enough for the people to relate their passionate nationalistic feelings to Hitler.

As mentioned before, it was not only the Versailles Treaty which played a role in the suffering of the German people, but also the failing economy itself. The war had cost a lot of money to uphold and Germany had put in substantial amounts to finance its war effort with its gold of which its banks were not in abundance of. The economy was not able to pay its workers so it decided to inflate the economy by printing horrific amounts of paper money. This is where International Jewry had played its cards for the exploitation of the economy, redistributing wealth among themselves. Additionally, the occupation of the Ruhr by the French and Belgian armies in January of 1923 also inflicted huge damage to the economy. To show how devastating this inflation was, we can see that in January of 1921, the exchange rate between the German mark and the American dollar was 64 marks to the dollar. By the time the inflation was happening, from 16 November of 1923, the mark was now worth 4.2 trillion marks to the dollar [3]. Here is another example of how the inflation hit produce:

Prices in Berlin from December 1923:

Because of the inflation, the international powers were not receiving their extortionate reparations from the economy, so a plan was put in place from August of 1924 called the “Dawes Plan” to latch the German economy onto foreign loans and investments, especially those coming out of New York and from overseas bank, creating a totally dependent system [5]. Though these loans would stabilise the economy for a short period of time, it would eventually prove deadly in 1929, when the Great Depression began. When the stock market crashed in New York, the loans for the German system disappeared and as a result, Germany collapsed like kicking a walking stick from an old man and unemployment skyrocketed from all the work disappearing. From hyperinflation to hyper-unemployment, the German people had enough and Hitler had the solution [6].

From the very beginning of the National Socialist Party, Hitler attracted the common German because he wanted them to see what the truth behind their reality was. He did this in such a physical fashion that it was entirely unique and it had drawn people into listen, regardless if they liked him or not. Hitler himself had written in Mein Kampf that it is the spoken word that is mightier than the pen, which is why he focused so heavily on public speaking [7]. While the Great Depression was happening, the German people lacked confidence in their international-oligarchic “democracy” and sought someone who could resolve the issue. Hitler had gained a substantial amount of support during the Great Depression, more than ever before, because he knew the problems and how to solve them:

“Never in my life have I been so well disposed and inwardly contented as in these days, for hard reality has opened the eyes of millions of Germans to the unprecedented swindles, lies and betrayals of the Marxist deceivers of the people.” [8]

It is true and undeniable that the hyperinflation and the Great Depression of the Weimar Republic leveraged Hitler and his ideology into power. Without the economic upset - though Hitler devoted his entire willpower to convincing the German people of the truth - the National Socialists very well may not have become the German nation. It was only at the times of economic stability that the German people were quite comfortable where they were, and when it had become worse, Hitler had become more desirable. Indeed, we can reflect upon the success of the economic and social recovery that started with the National Socialists, but it is safe to say that it would not have happened otherwise. 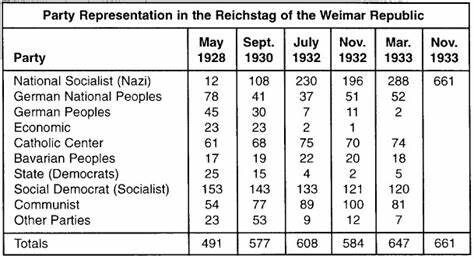