The funding of Hitler has often been meticulously stepped in conspiracy, thus alluring to a common argument of who actually funded the man. Even though there are many who would like to try and create a shroud of darkness around Hitler for his financial backing, there is nothing really meticulous about his funding. Just like any other politician, Hitler was supported by various interests who provided support because they either admired the man or they could see potential business with him for their own gains. What is important to clarify first and foremost is that Hitler was very particular to his supporters about the dangers of Communism and Marxism as his primary interest and this was one of the reasons as to why he also gained so much support. He was able to utilise the means of financial support in order to ascend to where he did, becoming his own banker from 1939 [2] and carry out the means of which he spoke about in Mein Kampf. So let us examine some of the financial backers for Hitler once and for all to settle the argument of who financed him.

Outside the sphere of public support (such as the common worker) which did not include actual financing of the National Socialist Party, Hitler had taken the primary interest from a variety of wealthy businessmen whether it came from industrialists, newspapers, military, bankers or private individuals. Such is the case with the following passage that lists financial aiders:

“By 1919 Krupp was already giving financial aid to one of the reactionary political groups which sowed the seed of the present Nazi ideology. Hugo Stinnes was an early contributor to the Nazi Party (National Socialistische Deutsche Arbeiterpartei). By 1924 other prominent industrialists and financiers, among them Fritz Thyssen, Albert Vögler, Adolph Kirdorf, and Kurt von Schroder, were secretly giving substantial sums to the Nazis. In 1931 members of the coal owners’ association which Kirdorf headed pledged themselves to pay 50 pfennigs for each ton of coal sold, the money to go to the organization which Hitler was building.” [3]

Emil Kirdorf, a prominent and wealthy industrialist, was also financial backer of Hitler too. Though he had some personal issues with the party before 1927 and mostly associating himself with the Deutschnationale Volkspartei, after 1927, he became an important supporter to Hitler, even attempting to access coal and steel for Hitler in the Ruhr. [4] Here is a following passage by Kirdorf in a newspaper:

“In 1923 I came into contact for the first time with the National-Socialist movement … I first heard the Führer in the Essen Exhibition Hall. His clear exposition completely convinced and overwhelmed me. In 1927 I first met the Fuehrer personally. I travelled to Munich and there had a conversation with the Fuehrer in the Bruckmann home. During four and a half hours Adolf Hitler explained to me his programme in detail. I then begged the Führer to put together the lecture he had given me in the form of a pamphlet. I then distributed this pamphlet in my name in business and manufacturing circles. Since then, I have placed myself completely at the disposition of his movement, shortly after our Munich conversation, and as a result of the pamphlet which the Führer composed and I distributed, a number of meetings took place between the Fuehrer and leading personalities in the field of indus. try. For the last time before the taking over of power, the leaders of industry met in my house together with Adolf Hitler, Rudolf Hess, Hermann Göring and other leading personalities of the party.” [5]

You will often discover a wide variety of businesses and industrialists in your research for Hitler’s financing. This is a crucial move to gain leverage and favour into any political position, such is the example of the meeting of May 1933 between Hitler and industrial leaders to gain a broader mass of industrial support. Even Henry Ford, one of the men who built America, financed Hitler and his war effort with the use of funds and raw materials [6].

Hitler additionally gained support from bankers and oil magnates such as Anglo-Dutch businessman Sir Henri Detering, who had personally financed substantial amounts of money to Hitler’s cause:

“The maintenance, at all cost, of the capitalist system in Germany had been for a decade one of the largest objectives of the big financers and industrialists of Europe and America. In 1931, reports were denied of a Detering loan of £30,000,000 to be made in exchange for a petroleum monopoly. In the presidential election of 1932, in which two leading candidates were Adolf Hitler and Paul von Hindenburg, Detering was accused of putting up a large sum of money for the Nazis on the understanding that success would give him a more favoured position in the German oil market. On other occasions, figures as high as £55,000,000 were mentioned.” [7]

Fritz Thyssen, a German steel magnate, banker, and early support of Hitler, also funnelled substantial funds through General Erich Ludendorff in his early support and through a subsidiary Dutch bank later on that Thyssen founded called “Bank voor Handel en Sheepvaart” (Bank for Trading and Shipping) [8]. His bank also controlled the Union Banking Corporation in New York and his partners were in Wall Street [9]. It is true that one of the seven directors for the Union, namely Edward Roland Harriman, had a family that provided funds for the Soviet Union, but the affiliation between the Harriman family and Thyssen has not been suggested to be on a mutual relationship for the same objectives [10].

Other notable backers are supplied in the images.

In a short summary, these financial providers are just a few to name in the support of Hitler. There were so many supporters for financial backing that it is impossible to compile into one post. When we look at this list of people who supported Hitler, what is important to remember is that these were just businessmen. I would say that the majority of those who supported Hitler were out there for their own personal gain rather than anything ideological to do with the man himself. It was not long after the war ended that many financers turned their profits elsewhere. You may find the odd Jewish connection from somewhere else but it seems as if there was nothing inherently direct to Hitler from an international Jew. 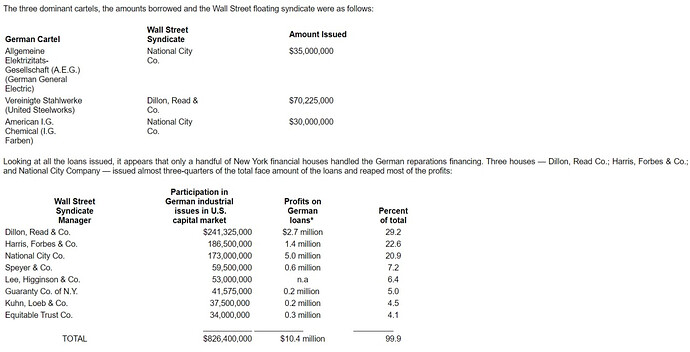 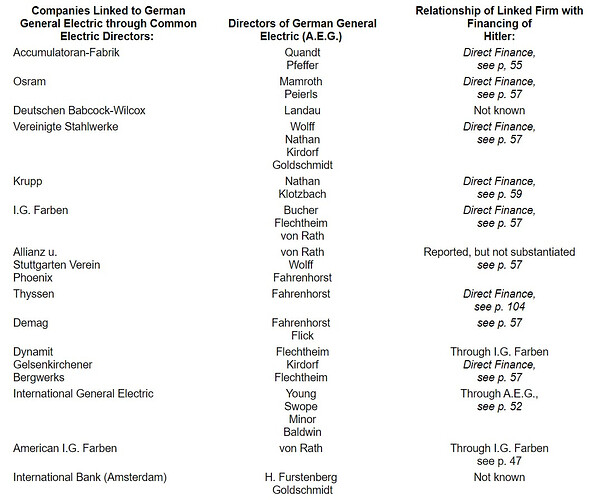 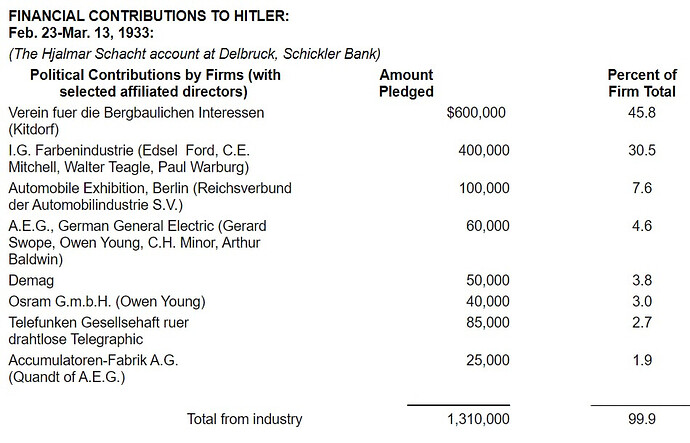