Why Did Adolf Hitler Abolish the Trade Unions? 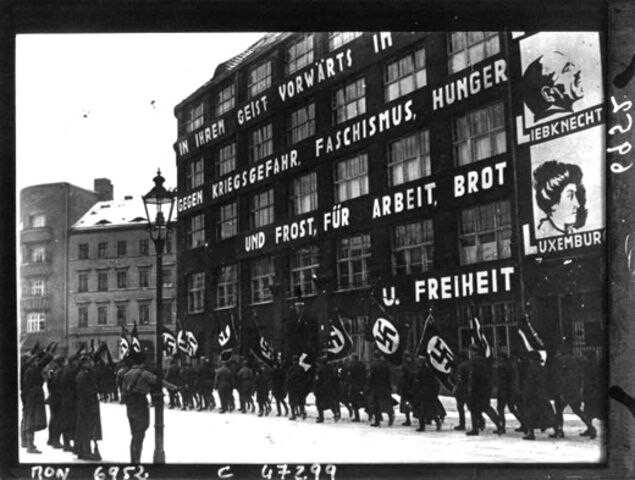 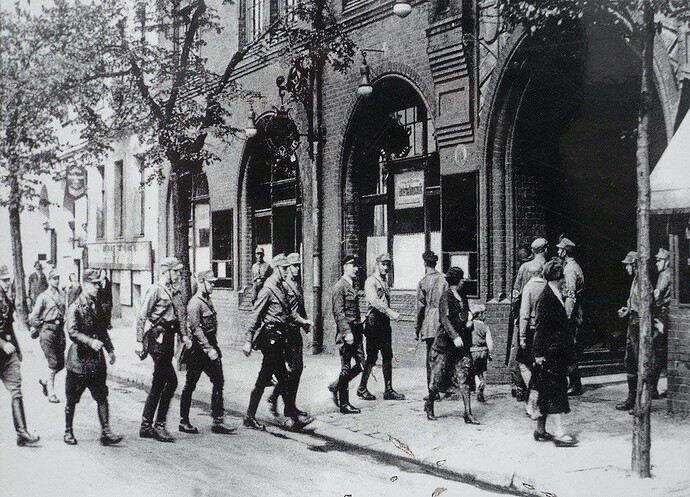 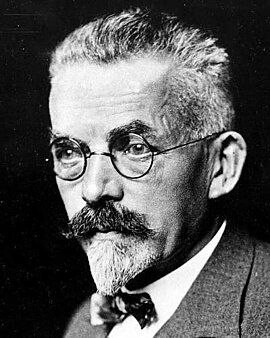 [1] picture one: National Socialists march outside of the Communist Party Headquaters in Berlin, Germany. Date unknown.

Picture two: Sturmabteilung men walk into the trade union offices to seize them and their leaders. 2 May, 1933.

Why Did Adolf Hitler Abolish the Trade Unions?

What is a Trade Union?

Before we begin to speak about trade unions, we should probably clarify what exactly a trade union is. A trade union is an organisation of members who are normally workers or employees. The purpose of a union is to look after the interests of the worker by fulfilling such duties as negotiating agreements with employers on pay and conditions of work, discussing members concerns with employers, and going with members to disciplinary and grievance meetings. In short, it is a form of legal protection for the worker should he be confronted with workplace difficulties that affect his working life.

During the Weimar Republic

After the First World War, a new umbrella organisation for trade unions was established in 1919 at the beginning of the Weimar Republic, namely the General German Trade Union Federation (Allgemeiner Deutscher Gewerkschaftsbund). Although there were other trade unions such as the Christian unions, the membership of the General German Trade Union Federation made up the most out of all unions [2]. Incorporated into this umbrella organisation were 52 free trade unions, which were not politically neutral, rather they supported socialist causes with a strong cooperation with the Social Democratic Party (Sozialdemokratische Partei Deutschlands) and included Communist Party members (Kommunistische Partei Deutschlands) [3]. It is imperative to highlight here that the relationship between the free trade unions and the Social Democrats cannot be mistaken: the Social Democrats heavily consisted of members who were Jewish Marxist-Socialists and were directly responsible for the November Revolution in 1918, causing the German Empire to lose the war [4]. By the end of the war, the Social Democrats became the foundation of the Weimar Republic, heading the government, and having members in the Communist Party and in the trade unions, thus its political influence with the common worker was huge [5]. The General German Trade Union Federation and the Social Democrats also fought against nationalist workers such as during the uprising of the 1920 Kapp Putsch by organising a strike of workers to counter the movement, and later in 1931 against the National Socialist German Workers Party (Nationalsozialistische Deutsche Arbeiterpartei) to counter their growing power [6].

During the Great Depression in 1929, trade union membership fell as more workers were becoming unemployed. As we have already spoken before about how Hitler had come to power, which you can read here [7], this dramatic fall in employment was one of the many reasons as to why the workers were beginning to vote for Hitler much more than before. Among this discourse, later in 1932, Theodor Leipart, the head of the General German Trade Union Federation, wanted to appear politically neutral among the party clashes in the sight of the National Socialists now coming to power; but Hitler, who knew the treachery of Leipart and how the organisation operated with the Communists and the Social Democrats to go against him and the workers, was not interested in his neutrality [8]. Even though Leipart wanted to appear neutral, he was not sincere and neither were the other trade unions. They all appeased because of what backlash they could face. This is reflected in one of such cases in which Leipart called for the trade union members to participate in the new May Day celebrations on the 1 May, 1933, which was essentially a copy of Labour Day [9].

May Day and Marxism

This was the turning point for Hitler and the trade unions. On 2 May, 1933, the day after May Day, the trade unions faced the consequences of their actions as all affiliated trade union offices to do with Leipart were stormed by the Sturmabteilung, the Schutzstaffel, and the National Socialist Factory Cell Organisation (Nationalsozialistiche Betriebszelleorganisation), (a workers organisation comprised of different trade unions, disbanded in 1935) [10]. When they entered the offices, the leaders of the unions were arrested and jailed, their assets were seized alongside all of their property - which was entrusted to a government commissioner - and the National Socialists occupied their offices. Assurance was given to the workers that this action of seizure was directed only towards the leaders, who were identified as traitors, who misused workers’ funds [11]. Immediately after May Day, the unions were dissolved and the German Labour Front (Deutsche Arbeitsfront) was created on 10 May, 1933, which then brought all the workers under one body, and was headed by Robert Ley. As for the leaders, like many other adversaries, they were sent to concentration camps to pay for their crimes. Leipart later recalled after the end of the Second World War that he should have acted sooner to stop Hitler taking power [12].

Why Hitler Abolished the Trade Unions

In summary, they were Marxists, who worked for the interests of the Social Democrats, who themselves were comprised of Jews, Socialists, and Communists, (who would eventually breakaway from the Social Democrats to form the German Communist Party, but all still worked closely together). Hitler was determined to root out Marxism and expose it, especially in the early days of power, and he expressed this sentiment to the people in order to recognise that they had been cheated. He had also called for the creation of a single union that would be ideologically unified and educated in the same worldview, namely one that sees no difference from each other in class or profession, rather one that sees each other as a worker who puts in their labour for the community of the people because they want to:

“Hitler instructed the Labour Service to be an instrument by which the lack of vision of the bourgeoisie and the class hatred of the proletariat should be counteracted and a true community of all Germans should be created [13].”

It can be understood that in order to dissolve the influences of Marxists, Jews, and other forms of degradation, such as those from the trade unions, Hitler had undertaken measures to bring the people away from their sway and into his own authority.